surfing footage from one of the many surf movies we are able to show. You can see footage showing the many elements that go to making up surfing’s rich heritage, the characters that have pioneered the sport in this country, and overseas and helped define the image of surfers over the years. You can see surfing evolve from, Duke Kahanamoku’s visit to Australia in 1915, through its eras of surf lifesaving club domination. See surfers being exposed to the improved performance of Malibu style boards in the ‘50’s, and dodging the draft dropping out of mainstream society and going in search of the soul fuelled surfing experience of the ‘60’s. The ‘70’s 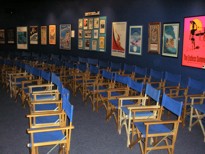 saw surfing evolve into a fully fledged professional sport with a world tour, and professional world champions. At the same time surfing businesses had evolved from humble beginnings to straddle the globe, selling the surfing image and lifestyle to the world. Surfing has since reached unparalleled levels of performance and the surf movie became a more serious form of entertainment.

Of course at the same time that these films were documenting the changes in board design and surfers performance they also recorded changes in the surf film making process. From early hand held Bell & Howell cameras and pioneer film makers such as Doc Ball, to the post war efforts of characters like Bud Browne, Greg Noll and Bruce Brown. These were surfers that made movies of other surfers, their friends surfing their regular breaks or fuelling up for road trip style surf adventures. Surfers loved seeing what other surfers were up to, what equipment they were riding , and checking out surf breaking in sometimes remote and often exotic locations.

Early screenings were often run on army surplus gear, relics from WW2. Films were shown with a live narration or musical group playing along to what was happening on screen. Surfers would help provide their own soundtrack with cheers, hoots, whistles, stomps and jeers accompanying the on screen action. The surf film was more of a happening than a simple night out at the pictures. A serious level of audience participation ratcheted up the energy levels which could tip over the edge depending on the footage being shown, or even degenerate into near riots if the projection gear failed

Hollywood got in on the act with all sorts of cheesy beach movies with big budgets and big names. As embarrassing as the Beach Blanket Bingo style of beach picture may have been, millions of people got to see films like Ride The Wild Surf and got a glimpse (many famous surfers of the time were extras for the movies) of a quirky, cool, 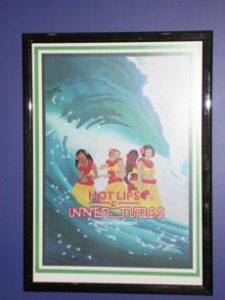 spectacular sport that just looked like so much fun. At the same time the genuine surf movie hit a high tide mark with Bruce Brown’s Endless Summer. This showed surfing in its true light with a laid back narrative by Brown himself that veered between charming and geeky. Endless Summer had an evocative theme of surfers travelling the world in search of perfect waves. In that, Bruce Browne lit the touchpaper of a surf travel explosion that continues to this day.

As production standards improved in the ‘70’s we got more impressive perspectives of the surfing action. Water shots looking into the barrel of Pipeline in Hawaii, tighter shots of big wave spots and profiles of the outstanding abilities of pro surfing’s leading lights, all added an intensity to the surf images on the screen. Pioneers like George Greenough showed us alternative views using highly modified equipment. Hoole and McCoy’s Tubular Swells saw a beautiful synthesis of contemporary surf travel and music, while Bill Delaney’s film Free Ride brought us right to the edge of performance surfing, with stunning “in the tube” footage at Off The 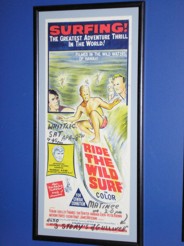 In the ‘80’s film makers in tandem with the major surf companies started steering away from expensive film production techniques and started to produce shorter format surfing videos. Of course the sweeping perspectives of earlier independent film producers waned, as the surf companies explored the promotional potential of in house surf vids. Fast edits and death metal soundtracks made many of these pics an assault on the senses but did little to relay the inherent grace and beauty of the wave riding experience.

Today surf movies, real ones shown in cinemas, have made a comeback of sorts. Dana Brown’s Step into Liquid took us back to simply exploring the different surfing experiences of a diverse group of surfers. The technology driven push into huge surf is simply dwarfed on TV and 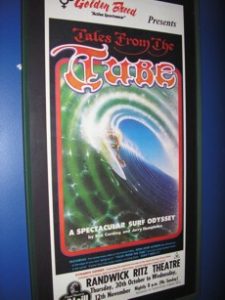 best seen on the big screen. Images like the opening sequence of Billabong Odyssey are awe inspiring as you see the surfer dropping down what looks like a bottomless wave, then what looks like the whole ocean tilts into a thundering cascade behind him.