Surfworld’s boardroom features a number of exhibits that detail the varied types and designs of surfboards that have been used in Australia since surfing was first popularised by Duke Kahanamoku’s first visit to Australia in 1915. As well as the different materials used in their manufacture. The boardwalk features a history of surfboards in Australia mounted on a 3D representation of a breaking wave. 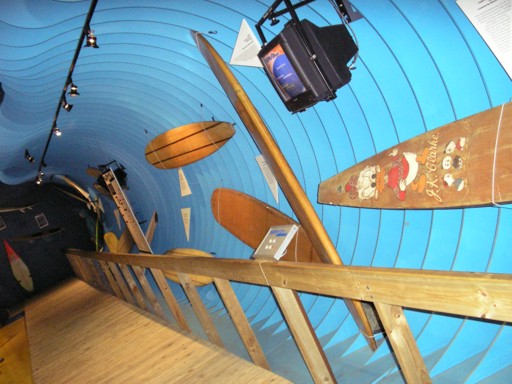 The display begins with one of Australia’s earliest and most significant surfboards, a solid redwood board, bought from Duke Kahanamoku in Hawaii by Louis Whyte of Geelong. Whyte travelled to Hawaii in 1919 after witnessing Duke Kahanamoku’s exhibition of surfing at Freshwater beach in 1915 (he had to wait till the end of the First World War). He purchased 4 surfboards from Duke (2 of them are on display at Surfworld) and spent some time in Hawaii learning how to surf. The redwood board that starts off this exhibition is 9ft by.

From there we move on to a hollow plywood 16 foot long board inspired by the designs of Tom Blake and featuring hand painted Hewey, Dewey and Louie design on the deck.

Next up is a balsa board loaned to us by Arthur Parkin who was involved in bringing the American and Hawaiian teams to the Olympic Surf Carnival in 1956. The board is typical of the mid ‘50’s style balsa Malibu covered with fibreglass and featuring a fixed timber fin. The board also has a curious shield style logo………………
These boards are regarded as high art, not just as an example of period surfing equipment, and ultimate examples of surfboard building as an art.

In the late ‘50’s surfboard manufacture moved into lighter more easily shaped materials with polyurethane foam cores becoming standard. The lighter more easily produced boards were the basis for the boom in surfing’s popularity in the early 1960’s as the boards were more user friendly as well as being easier to produce. The nascent surf media, movies and magazines helped kick surfing’s momentum up a gear and helped to popularise this fun sport. The evolution of the foam cored board can be traced here from an early Hobie triple redwood stringer Malibu, to a Bob McTavish shaped plastic machine with a very ‘groovy’ psychedelic logo. We have a Dewey Webber pintail that was shaped for Randy Rarick as the “Down Under Wonder”. Surfworld also has a Nat Young model Keyo shortboard, as well as an unusual George Greenough ‘Spoon” featuring a rubberised tail section.

As the boards move into the mid 1970’s key designs are represented, such as a beautiful Hawaiian winged pintail gun, shaped by Tom Parish with lightning bolt on the deck. One of Terry Fitzgerald’s own wing pintail Hot Buttered boards featuring a full airbrush mural of a breaking wave morphing into a bird in flight. We have one of Mark Richards super successful twin fin designs which he first refined then rode to a record breaking competitive career as well as an “original 3 finned design thruster by Simon Anderson who revolutionised board design with his breakthrough multi fin board.

The Boardroom also serves as exhibition space for temporary exhibitions, such as the recent ‘Twin Fin Fever’ exhibition.